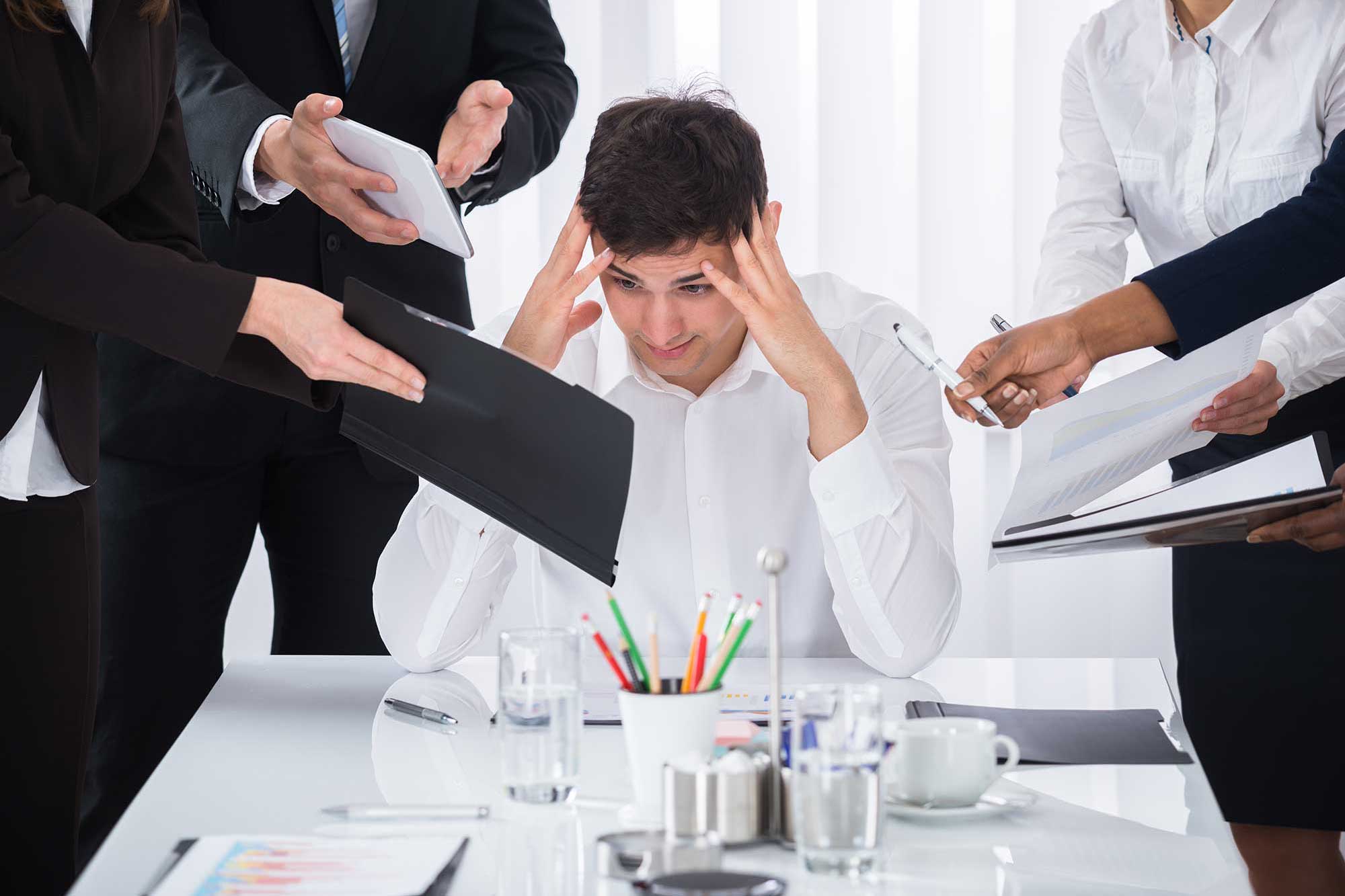 Welcome back loyal readers. This week we are going to discuss some very personal items regarding Lisa and me.

I plan on writing this blog through the eyes of one person with anxiety and a day in the office. Telling my story of how my day went and my battle with anxiety through that day.

My life has been a mishmash of incredible craziness over the years. I am not going to go much into my backstory, but those that know it want me to write a book on the subject. I am still debating that as it would be a tough thing to relive and bring back to the fore.

The focal point of this blog today will be with dealing with anxiety in the workplace. I have suffered from mental health issues since I was very young. It runs in my family and, people like my cousin Matt, have shared their stories on the struggles they have had with anxiety and depression.

While I bring this into the open, it causes my heart to race, and my palms to get sweaty. But, if I can help one person to know they are not alone then I have succeeded.

Anyone with anxiety knows half the problem is the fact we hide it from others. It causes a spiral of anguish and more anxiety. We can become paranoid as to whether others are noticing our anxiety and whether they are judging us, in some form. I really hate this spiral, as it feels like it’s never ending and impossible to escape.

Now take the anxiety you suffer from and put it in an office environment with 10-100 people. That’s a lot of eyes you think you have on you. It is rather unnerving, at times, as we assume and try to figure what’s going on in other peoples’ heads.

I am going to tell you a story of anxiety, from my head. I will not name names or name places or anything of the sort. That will not be the point of this, the point is the anxiety and its effects on a person.

I would get into the office early, as I liked the quiet and the calm of no one around. I needed time to adjust and prepare for people to arrive. Music has always been a calming influence on me. I would put on my favourite albums, 80’s hard rock from my childhood, and teen years. I’d sing along in my head, ignore the world and set myself up for the day.

Not in the slightest. It may have chilled me out, but I can tell you I was on a razor’s edge from 8am-5pm at night.

Did it go away once I got home?

NOPE. It would carry over, even at home. Maybe by bedtime I would have calmed down inside. A maelstrom of emotions washing over inside me.

Back at the office people would start coming in and joking around with all the people around me. Sometimes, if it got too much, I would get up and excuse myself to “go get coffee”. Usually people took this as an invitation to join me. Sometimes I didn’t care, I would use the idle chit chat to try and steel my nerves for the day.

What a lot of these people did not realize is HOW I was feeling inside. The internal anxiety churning around in my head while they made plans to go on vacation, concerts or even out on dates. I was thinking how I will make through this day. How will I keep my heart from exploding out my chest from sheer panic?

The world just kept going on around me. I just wanted to get back to my desk and headset. To crank the music and settle those nerves swirling inside.

Next up: meetings with clients and other coworkers. These could be 5 minutes in length or 2 hours long. Depended on the day of the week, and on what we were doing. My boss knew I had anxiety and was supportive, for the most part but, I don’t think anyone knew the extent of what I was feeling.

Few days a week I oversaw morning calls with a very important client. The call was on speaker so everyone in the office space could hear the entire conversation. We discussed what we were doing, what was coming next and any barriers we had. Little did everyone know I had massive barriers internally.

I had to fight to get the words out anytime it was my turn to talk. It was like a 12-round match with Mike Tyson, in some ways, and I did not come out feeling like the winner. I would be exhausted afterwards, with no energy left. By 10 am in the morning I was already so tired from the energy used to complete my morning call.

Sad part of all this is I am not even sure anyone noticed it. The fact that I had just had the fight with anxiety the entire time. Sometimes I would be criticized if I did not give enough information or gave too much. This was all in the spirit of helping me get better at it. I understand this was just the way things were at most offices.

Was the advice mean spirited or done in an untactful way?

Not really but, in my head, it didn’t matter. I was already exhausted from fighting with anxiety and just took whatever was said to me as fact. I nodded, said yes, and told them what I would do to try and improve.

It would feel like an eternity to get to lunch time. Lunch was always my favourite time of the day. Why you ask? It, generally, was the time I grabbed my headset and went off somewhere alone. I used it as regrouping time. Did I get it every day? NOPE. I had to appear to be one of the team and go for lunch with everyone. One of my favourite places to go was out in the gardens. I used to be a landscaper, and I have always found being out in nature was a place of calm for me. Sometimes I would sit there and shake. I hoped no one would notice as a panic attack would wash over me.

Near the end of my time there, I didn’t even get up from my desk at lunch. I worked through lunch and skipped it. I didn’t want to move because the anxiety was coursing through me. It was paralyzing. I will get to the why in a bit.

In the summer I would go for walks and wander around listening to music. I would sit somewhere outside and enjoy the weather. Don’t get me wrong, I LOVED what I did. I was fighting with anxiety just to survive the day.

By 3pm this had taken a toll on me. I was basically fueled by coffee just to make it through the day. When I worked in the office, I had maybe 4-5 coffees a day. I needed them just to have the energy to move forward.

I would even go have a coffee after dinner I wanted to make it to 9pm. Not exactly a good thing as that’s a heck of a lot of coffee. Add in a few caffeinated beverages, like Coke or Red Bull and some days I felt like Tweek from South Park. I needed this just to function.

Here is the problem with all that caffeine: It fuels your anxiety. Makes it faster and more uncontrollable.

I am an adult with Adhd and that much caffeine is never a good thing. My mind is already going a million miles a minute.

Finally, 5pm rolled around and it was time to go home. Do you think I was relieved or the anxiety lessened?

The answer is a resounding NOPE. It carried on at home. So even though I had “ESCAPED” the office the anxiety followed me back to the house. Worried about the day tomorrow, work that needed to be done and future projects. I worried about interactions with people in the office, more important phone calls to come and figuring out how to “correct” stuff that was suggested at the office for interactions with clients.

I would be crusty and grouchy. I didn’t mean to, I really did not. I just wanted my mind to stop moving and for the anxiety to end. I would act irritable and take that out on those closest to me. Bringing on more anxiety on how I was reacting and how I was affecting others. I know there are many out there that understand that feeling. A cycle that you feel just never ends.

I was told that my contract would be ending on a certain date. I was told I did nothing wrong, it was a financial thing. That day I almost had a nervous breakdown. It was the last thing I expected. I called Lisa and we talked for the entire lunch hour, as I tried to calm down. I kept it together but inside I was hurting and full of heavy anxiety.

I know others out there have gone through similar situations. I was a ball of nerves the moment that bombshell was dropped. So, for the next two months I lived in anxiety 24/7. Paranoid, and wondering what others knew about me leaving. I swear, at some points, I was going to have a heart attack from the stress I was living in.

I was unbearable at home, and quiet at work as the anxiety ate me alive. My loved ones had no clue what to do to help me as I would snap at the simplest suggestions. No one could help me, but me. That was the hard part. All this on the inside and sometimes it would boil out into full on panic attacks at home and at the office.

The difference at the office is no one would see it, and if they did, no one said a word. There were a lot of great people who tried to be supportive but, I don’t know if anyone knew how to handle it. For sure, I was unaware of how to handle it even with years of classes and reading books on the subject.

I can tell you I had 5x the panic attacks during this time. Sometimes several times a day. I would take breaks and find a place to hide on the grounds, as panic washed over me. It was almost uncontrollable at times.

All I knew was that I had to make it to my last day so that I could at least deal with the source of the anxiety.

You know what? I made it and I believe a bit stronger for it!

I can tell you writing about a day in the office was extremely hard for me. I know other people have lived through the exact same emotions and paralyzing feelings. Do I have the same level of anxiety at Provoke? NO, I don’t. Has the anxiety left totally? No, it has not and probably never will. I can say I feel more at home here and the pressure while there is not the same. I feel supported.

My home life has calmed. I now only drink maybe a coffee a day. My life is more balanced. I want this blog to be about what we felt in those situations. A story of a day in an office with a person with high anxiety.

I want you to realize YOU’RE NOT ALONE.

Thank you! Your submission has been received!

Oops! Something went wrong while submitting the form :(